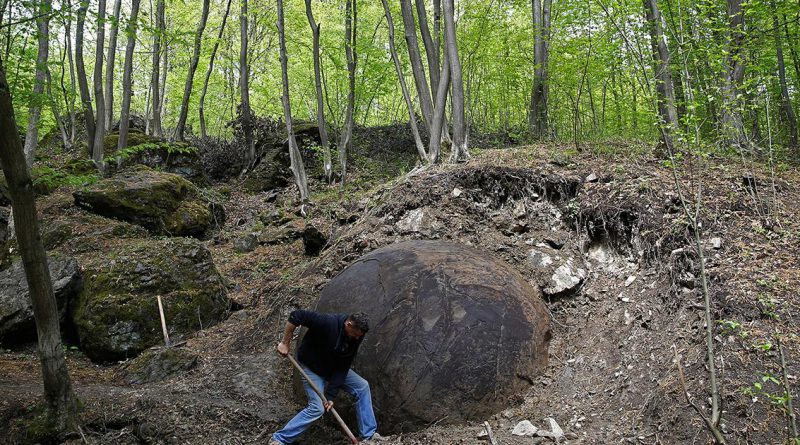 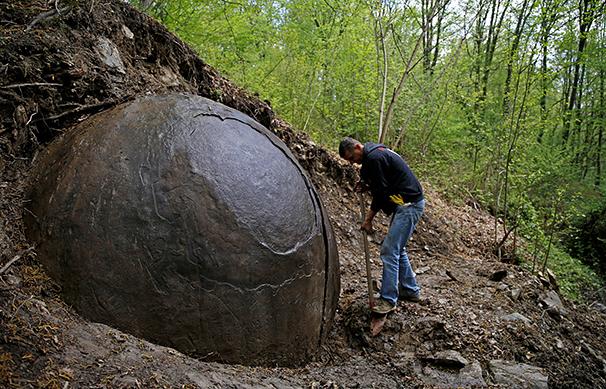 An Indiana Jones type archaeologist, Dr. Semir Osmanagich, discovered a mystery giant stone ball in a Bosnia forest earlier this year.  No one knows if the object is man-made or naturally formed, but that doesn’t stop anyone from speculating.  Early tests indicate the composition of the ball could mean the ball weighs no less than 30 tons, which means the mystery ball could be the biggest stone ball ever found.  “It might end up as the biggest stone ball on the planet,” Osmanagich claimed.

After the discovery, Osmanagich offered his thoughts on the find, “First, it would be another proof that Southern Europe, Balkan and Bosnia in particular, were homes for advanced civilizations from the distant past and we have no written records about them. Secondly, they had [advanced] technology, different than ours. Finally, they knew the power of geometrical shapes, because the sphere is one of the most powerful shapes along with pyramidal and conical shapes. No wonder, that pyramids and tumulus phenomena can also be found in Bosnia.”

This mega-huge ball isn’t the only one ever found on planet Earth.  Comparable stone spheres have been discovered in different sites like Costa Rica, Easter Island, Tunisia, and parts of Albania, but it may be the biggest find yet.

Osmanagich’s discovery has stimulated great interest among researchers and archeologists, and not everyone is in agreement with Dr. Osmanagich.  Mandy Edwards from the University of Manchester’s School of Earth, Atmospheric and Environmental Sciences has her own theory.  “The sphere in fact, may not be man-made at all. Describing the process of ‘concretion’ […] the sphere could have been formed due to precipitation of natural mineral cement within the spaces between sediment grains.”

We definitely don’t claim to have all the answers, so we’ll let you choose which theory resonates more strongly with you, but finding evidence of an unknown ancient civilization would be pretty cool. 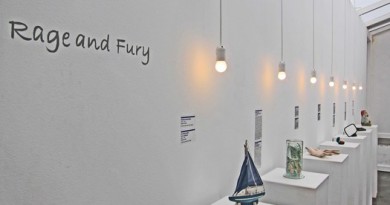 The Museum of Broken Relationships Opening Soon in L.A. 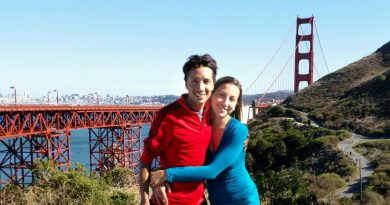 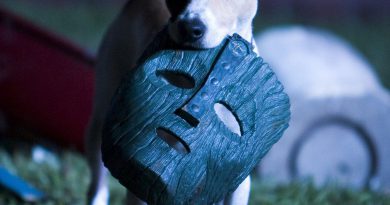